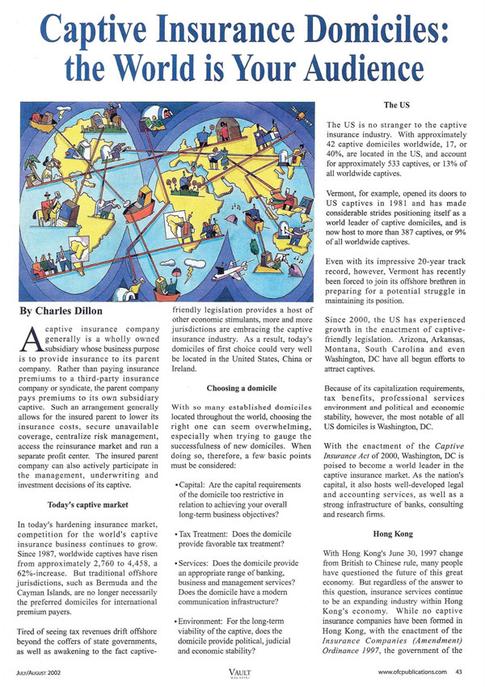 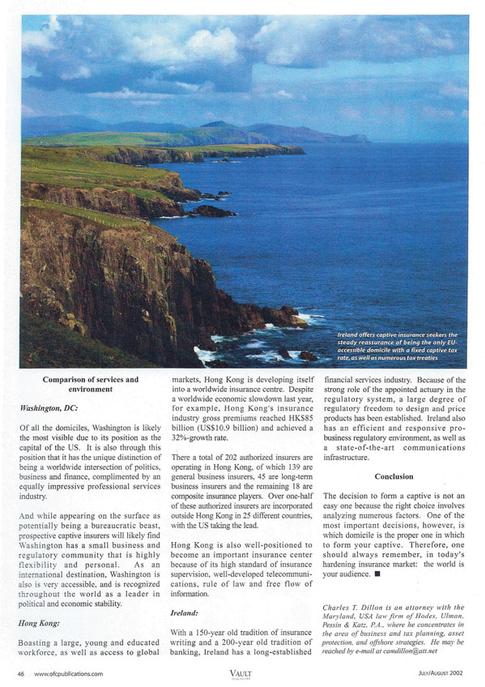 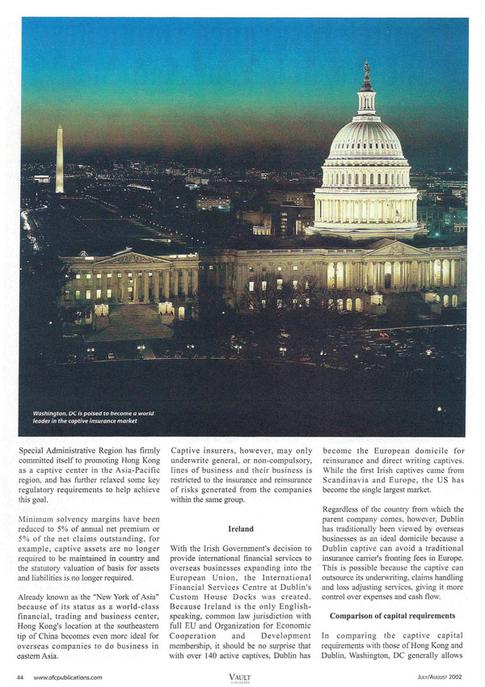 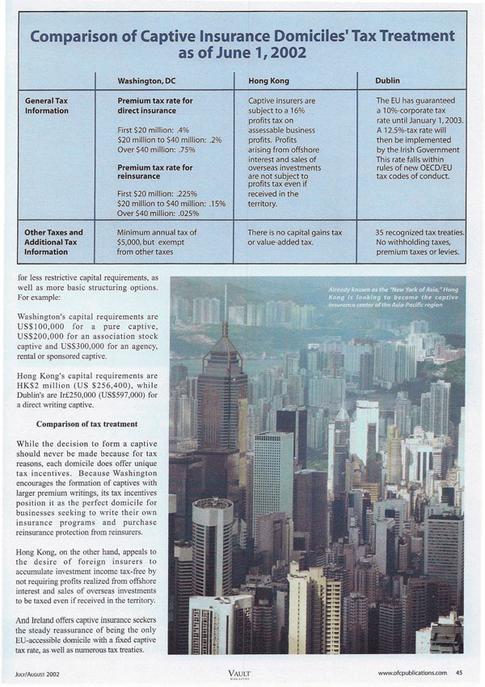 A captive insurance company generally is a wholly owned subsidiary whose business purpose is to provide insurance to its parent company. Rather than paying insurance premiums to a third-party insurance company or syndicate, the parent company pays premiums to its own subsidiary captive. Such an arrangement generally allows for the insured parent to lower its insurance costs, secure unavailable coverage, centralize risk management, access the reinsurance market and run a separate profit center. The insured parent company can also actively participate in the management, underwriting and investment decisions of its captive.

In today's hardening insurance market, competition for the world's captive insurance business continues to grow.  Since 1987, worldwide captives have risen from approximately 2,760 to 4,458, a 62%-increase. But traditional offshore jurisdictions, such as Bermuda and the Cayman Islands, are no longer necessarily the preferred domiciles for international premium payers.  Tired of seeing tax revenues drift offshore beyond the coffers of state governments, as well as awakening to the fact captive-friendly legislation provides a host of other economic stimulants, more and more jurisdictions are embracing the captive insurance industry. As a result, today's domiciles of first choice could very well be located in the United States, China or Ireland.

With so many established domiciles located throughout the world, choosing the right one can seem overwhelming, especially when trying to gauge the successfulness of new domiciles. When doing so, therefore, a few basic points must be considered:

The US is no stranger to the captive insurance industry. With approximately 42 captive domiciles worldwide, 17, or 40%, are located in the US, and account for approximately 533 captives, or 13% of all worldwide captives.  Vermont, for example, opened its doors to US captives in 1981 and has made considerable strides positioning itself as a world leader of captive domiciles, and is now host to more than 387 captives, or 9% of all worldwide captives.

Even with its impressive 20-year track record, however, Vermont has recently been forced to join its offshore brethren in preparing for a potential struggle in maintaining its position.

Since 2000, the US has experienced growth in the enactment of captive-friendly legislation. Arizona, Arkansas, Montana, South Carolina and even Washington, DC have all begun efforts to attract captives. Because of its capitalization requirements, tax benefits, professional services environment and political and economic stability, however, the most notable of all US domiciles is Washington, DC.

With the enactment of the Captive Insurance Act of 2000, Washington, DC is poised to become a world leader in the captive insurance market. As the nation's capital, it also hosts well-developed legal and accounting services, as well as a strong infrastructure of banks, consulting and research firms.

With Hong Kong's June 30, 1997 change from British to Chinese rule, many people have questioned the future of this great economy. But regardless of the answer to this question, insurance services continue to be an expanding industry within Hong Kong's economy. While no captive insurance companies have been fanned in Hong Kong, with the enactment of the Insurance Companies (Amendment) Ordinance 1997, the government of the Special Administrative Region has firmly committed itself to promoting Hong Kong as a captive center in the Asia-Pacific region, and has further relaxed some key regulatory requirements to help achieve this goal.

Minimum solvency margins have been reduced to 5% of annual net premium or 5% of the net claims outstanding, for example, captive assets are no longer required to be maintained in country and the statutory valuation of basis for assets and liabilities is no longer required.  Already known as the "New York of Asia" because of its status as a world-class financial, trading and business center, Hong Kong's location at the southeastern tip of China becomes even more ideal for overseas companies to do business in eastern Asia.  Captive insurers, however, may only underwrite general, or non-compulsory, lines of business and their business is restricted to the insurance and reinsurance of risks generated from the companies within the same group.

With the Irish Government's decision to provide international financial services to overseas businesses expanding into the European Union, the International Financial Services Centre at Dublin's Custom House Docks was created.  Because Ireland is the only English speaking, common law jurisdiction with full EU and Organization for Economic Cooperation and Development membership, it should be no surprise that with over 140 active captives, Dublin has become the European domicile for reinsurance and direct writing captives.

While the first Irish captives came from Scandinavia and Europe, the US has become the single largest market.  Regardless of the country from which the parent company comes, however, Dublin has traditionally been viewed by overseas businesses as an ideal domicile because a Dublin captive can avoid a traditional insurance carrier's fronting fees in Europe. This is possible because the captive can outsource its underwriting, claims handling and loss adjusting services, giving it more control over expenses and cash flow.

While the decision to form a captive should never be made because for tax reasons, each domicile does offer unique tax incentives. Because Washington encourages the formation of captives with larger premium writings, its tax incentives position it as the perfect domicile for businesses seeking to write their own insurance programs and purchase reinsurance protection from reinsurers.

Hong Kong, on the other hand, appeals to the desire of foreign insurers to accumulate investment income tax-free by not requiring profits realized from offshore interest and sales of overseas investments to be taxed even if received in the territory.

And Ireland offers captive insurance seekers the steady reassurance of being the only EU-accessible domicile with a fixed captive tax rate, as well as numerous tax treaties.

Comparison of services and environment

Of all the domiciles, Washington is likely the most visible due to its position as the capital of the US. It is also through this position that it has the unique distinction of being a worldwide intersection of politics, business and finance, complimented by an equally impressive professional services industry.

And while appearing on the surface as potentially being a bureaucratic beast, prospective captive insurers will likely find Washington has a small business and regulatory community that is highly flexibility and personal. As an international destination, Washington is also is very accessible, and is recognized throughout the world as a leader in political and economic stability.

Hong Kong is also well-positioned to become an important insurance center because of its high standard of insurance supervision, well-developed telecommunications, rule of law and free flow of information.

With a 150-year old tradition of insurance writing and a 200-year old tradition of banking, Ireland has a long-established financial services industry. Because of the strong role of the appointed actuary in the regulatory system, a large degree of regulatory freedom to design and price products has been established. Ireland also has an efficient and responsive pro-business regulatory environment, as well as a state-of-the-art communications infrastructure.

The decision to form a captive is not an easy one because the right choice involves analyzing numerous factors. One of the most important decisions, however, is which domicile is the proper one in which to form your captive. Therefore, one should always remember, in today's hardening insurance market: the world is your audience.

Captive Insurance Domiciles:   the World is Your Audience