Considered by many to be the world's third-largest business by value, money laundering should concern almost every business owner. Whether one’s business interests include owning or operating a financial institution, professional service company, industrial enterprise or a charitable organization, money laundering charges levied against one's organization, directors, management or employees could jeopardize a business’s reputation.

What is money laundering?

Money laundering is the process by which the financial proceeds from criminal activities arc transferred though a country's retail economy or financial system to hide their illegal origins.

Usually, these proceeds are derived from drug trafficking; however, significant proceeds also come from other nefarious activities that generate illegal profits, such as extortion, fraud and bribery, terrorism, the trafficking of human beings for slavery and prostitution, smuggling weapons and nuclear material and white-collar crime, Including tax evasion, counterfeiting, false invoicing, financial fraud and Intellectual property theft.

Although most governments use different tools to identify and halt Illegal proceeds from gaining access into their respective territories, most do agree to certain basic definitional understandings of the laundering process, as well as to the basic steps the illegal funds must follow to complete the money laundering process and ultimately appear clean.

Complying with the numerous International anti-money laundering laws, policies and practices, however, is a daunting task for even the most compliance-conscience business. In fact, with more than 100 countries enacting and enforcing their own unique versions of anti-money laundering laws, maintaining arid enforcing adequate compliance measures can be a challenging task.

Until recently. anti-money laundering laws, policies and practices have been slow to gain worldwide acceptance and support.  In 1989, the G-7 countries created the Financial Action Task Force, an independent Intergovernmental agency consisting of 26 nations, including principal major economies, to examine and report on measures to combat money laundering, monitor anti-money laundering measures, analyze money laundering activities and advise FATF members and non-member countries. While the FATF has played a revolutionary role in encouraging global anti-money laundering compliance, a comparison of anti-money laundering attitudes in Hong Kong, the United Kingdom and the United States displays the drawn-out evolution each has experienced in adopting adequate enforcement tools. the priority taken by certain countries in enacting and enforcing financial crimes laws and, in some cases, the need to consolidate legislation

With the enactment in 1989 of the Drug Trafficking (Recovery of Proceeds) Ordinance, Hong Kong took its first step to fight drug-related money laundering.

While drug trafficking according to Hong Kong legal standards includes offenses such as manufacturing and importing/exporting, Hong Kong eventually realized its definition of money laundering failed to adequately cover all organized and serious crimes.

Thus, in 1995, the Organized and Serious Crimes Ordinance, Cap 455. was enacted, which states many laundering offenses apply to the proceeds of “indictable” offense, rather than only financial proceeds from drug trafficking.

In essence, this means Hons Kong does not welcome the financial proceeds of overseas criminal activities, and any attempt to use its retail economy or financial system constitutes an offense in the territory. The ordinance was amended in June 2000, by requiring money changers and remittance agents to follow anti-money laundering measures such as customer identification and keeping of records for transactions of or over HK$20,000 (UUS$2,564).

Much like Hong Kong, money laundering as an offense did not exist in the UK before the mid-1980s, when specific legislation against the laundering of the proceeds of drug trafficking came into effect. While the UK’s first specific anti-money laundering were passed because of the threat posed by drug traffickers, later laws have highlighted the particular financial threats posed to the UK by terrorist groups. The UK's primary legislation now covers the laundering of proceeds from drug trafficking, terrorism and general crime. But the legislation has not been consolidated and important differences remain between the treatment of these three types of proceeds.

Regardless of the UK's lack of any coherent consolidation, however, the primary legislation's sophistication is continuing to evolve by extending the money laundering offense in two principal ways:

• To cover the proceeds of crime in general

• To introduce new offenses, such as: making it illegal to inform suspected money launderers information about them is being collected by enforcement authorities, or that they are under investigation; failing to disclose to one's knowledge or suspicion another is involved in laundering drug or terrorist money; and acquiring, possessing or using laundered funds.

Since the terrorist attacks against the US on September 11.2001, the US has made enacting and enforcing laws aimed at tracking, preventing and arresting those involved in money laundering a top priority of US national security. In fact, most American businesses, in one way or another, are subject to increasing governmental oversight of their activities.

The USA Patriot Act, enacted after the attacks, gives broad additional authority to a number of federal agencies to investigate and prosecute businesses and individuals suspected of money laundering.

Due to this heightened awareness and increased priority of tracking financial crimes, the US
Government is slapping businesses with large fines for suspected money laundering activities; requiring businesses to establish and implement anti-money laundering procedures; and requiring the collection and archiving of more extensive Know Your Customer information.

The act also increases the role of the Financial Crimes Enforcement Network (FinCEN), a bureau of the Department of the Treasury, and requires FinCEN to maintain a government wide database encompassing all Know Your Customer information.

Although there is no uniform definition of money laundering, or for that matter, any uniform compliance and enforcement tools to combat it, there Is general worldwide agreement as to the three basic steps the laundering process must take for laundered funds to appear clean;

• Placement. One must physically dispose of the funds derived from criminal activities. This step is commonly referred to as "placement," and is often accomplished by depositing the illegal funds in domestic financial Institutions, shipping it across international borders for deposit in foreign financial institutions or by buying high-value products or goods to be resold later in a separate transaction.

• Layering. The funds must then be disguised. An audit trail is avoided by using the funds in a series of complex financial transactions aimed at separating them from their original illegal source. This step Is commonly referred to as "layering," and usually consists of the wiring OT conversion of "placed" funds into monetary instruments, real estate and business interests. Traditionally. offshore tax havens, though the use of shell companies, are a common tool in this phase (If the laundering process.

• Integration. The wealth derived from the illegal proceeds must now appear to come from legitimate sources. This final step, known as integration," involves a series of techniques such as utilizing a shell company to loan-back the criminal enterprise the "layered" money, or use the funds as security in obtaining commercial loans from legitimate domestic sources. 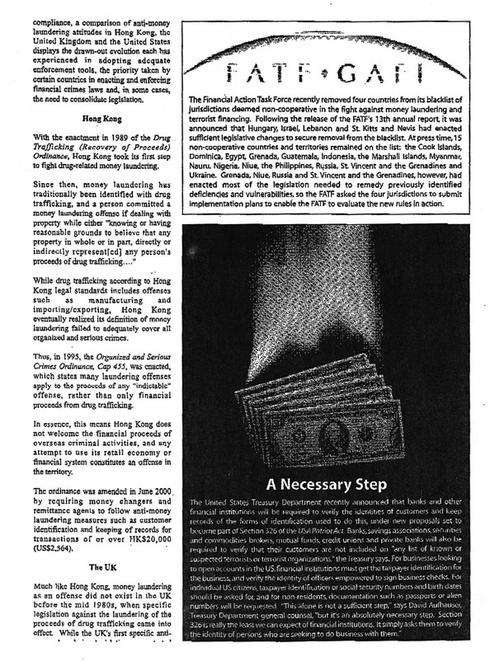 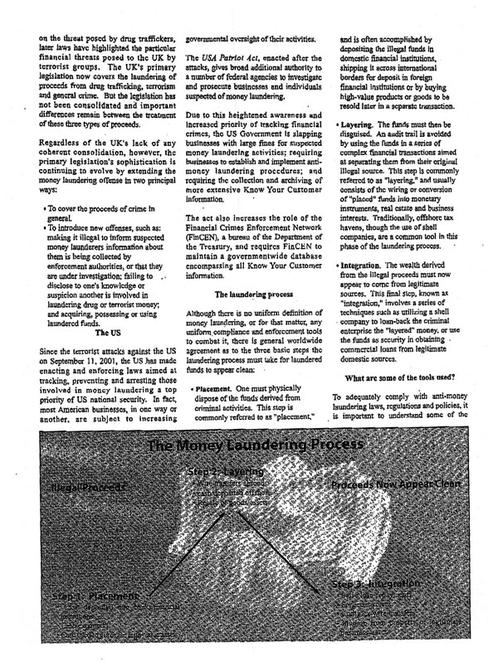 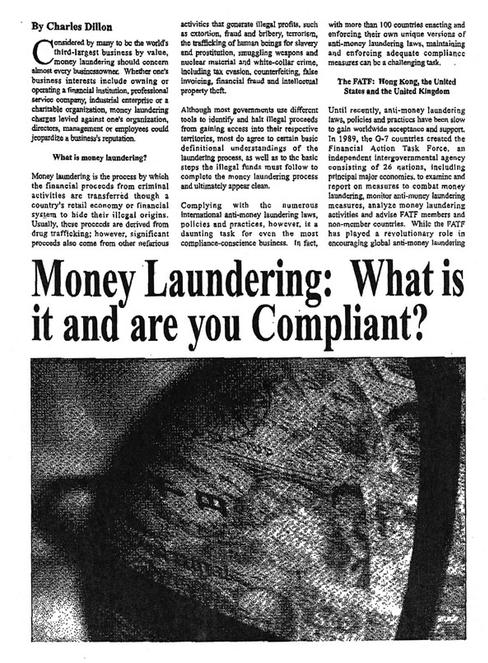 What is it and are you compliant?

What are some of the tools used?

To adequately comply with anti-money blundering laws, regulations and policies, it is important to understand some of the basic tools money launderers use in today's retail economics and financial markets.  While the tools vary depending on geographic location, the amount of the illegal proceeds and the favored laundering techniques, most laundering tools can be allocated between three principal categories:

How to protect your business

Is your business compliant with international regulations and enforcement requirements? Will your business's systems and protocols protect it against use by money laundering interests? Are you ready for a governmental audit of your records, compliance procedures and policies?

If your answer to these three questions is, "No," or even, "Maybe," you should be aware of several anti-money laundering compliance concepts to be worked into your accounting and financial control systems.

First, assess your own risk profile. Is your business vulnerable to being used for money laundering? If so, you should establish internal anti-money laundering laws, regulations and policies.

Second, know your customer and know the counter partners. Identify and verify the parties involved in every transaction.

Third, know your business. Protect your integrity and reputation. Know how, when and where: to recognize unusual transactions.

Fifth, learn to recognize suspicious transactions and transaction sizes and report them to the appropriate officials in accordance with anti-money laundering laws, regulations and policies.

No longer is the world disinterested when it comes to enforcing money laundering laws, regulations and policies.  In fact, now is the time for business owners, and even employees, to protect their reputations by complying with anti-money laundering requirements.

In general, while anti-money laundering laws have yet to fully prove their effectiveness and cooperation between governments with respect to money laundering is still evolving, don't let the proving grounds be your business enterprise, or worse yet, you personally.Type your paragraph here. 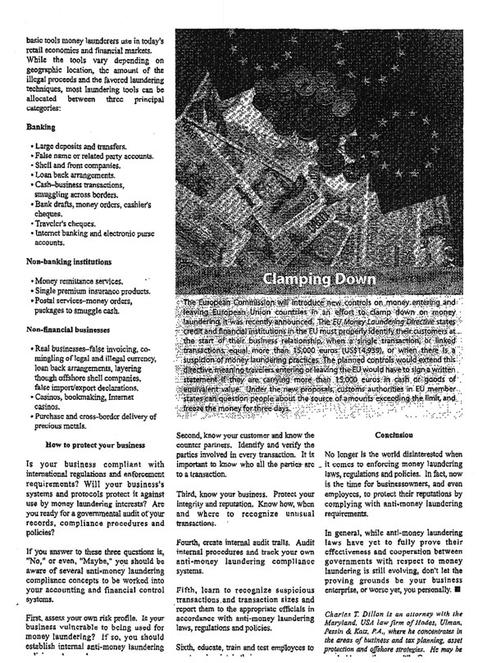