The Perfect Storm - A hurricane of US legislation, enacted and proposed, has the power to forever change the offshore legal practice 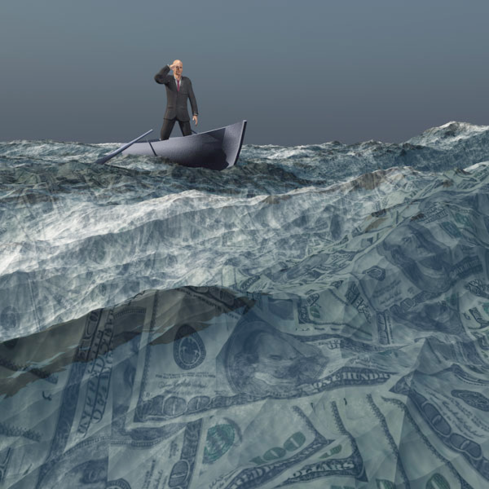 Last year resulted in a storm of new legal concerns. Much like the heroic - and at times crazy - ship captain played by George Clooney in the movie The Perfect Storm, legal advisors practicing in the global and offshore arena should be preparing themselves for the long-term and potentially destructive affects arising from the hurricane of legislation enacted and proposed since the September 11 terror strikes on the United States. This hurricane has brought with it a deluge of potential advisement and reporting requirements for the legal profession.

The deluge has arrived in two waves. The first arrived with the enactment of the USA Patriot Act and the second is the pending S. 2498, Tax Shelter Transparency Act.

Title III of the act applies to all financial institutions. Unfortunately, the law itself is not clear on a number of issues and many portions require the US Treasury secretary to promulgate regulations to address specific requirements. Until such regulations are issued, the complete effect of these new requirements remains unclear.

Despite Title III's lack of detail, legal advisors know certain problems are likely to arise. Changes will be seen in the types of business certain clients are authorized to engage in, how these businesses are to be conducted, the tools necessary to carry out anti-money laundering policies and procedures and an increase in some non-compliance penalties.

Some of the changes will result in additional regulations relating to identity verification. There will also be new or increased due diligence procedures for officers and banking specialists. Mandates relating to operations may cause financial institutions to increase their record keeping and reporting frequency.

As part of the requirement to create policies for and implement anti-money laundering programs, legal advisors should be expected to review the safeguards their clients have in place to keep in compliance with the law. Although the full impact of these legislative changes is not yet known, the following actions should be advisable now to clients:

• Gather information on the foreign banks with which your clients have legitimate correspondent accounts. This information should, in part, include names of the owners and principals of these banks, and who is authorized to accept a subpoena, or other legal documents and orders on its behalf.

• Review your client's anti-money laundering policies and procedures. This should include comparing your customer information against the lists of Specially Designation Nationals and Blocked Persons provided by the Office of Foreign Asset Control, as well as other agency lists.

S. 2498 would amend the Internal Revenue Code to require adequate disclosure of transactions which have a potential for tax avoidance or evasion. Given the complexity of our tax laws, Congress has built into the system the flexibility to reasonably interpret the law without the threat of having penalties imposed when such interpretations are challenged by the IRS.

On the other hand, taxpayers face penalties on tax deficiencies assessed with respect to tax shelter transactions, unless they can establish that they held a reasonable belief the tax treatment shown on their tax returns with respect to such transactions was "more likely than not," -i.e., a greater than 50% likelihood of prevailing-the proper treatment. Because many tax shelter transactions utilize offshore entities or some component of an international transaction, legal advisors must stay current of this ever-changing area of the law.

S. 2498 would subject taxpayers to penalties for any reported return position on business or personal returns, unless the position was specifically disclosed or both taxpayer and preparer reasonably believed the return position was "more likely than not" the correct position.

These actual and contemplated changes will be a burden to many clients and will make many legal advisors recommend to their clients to file disclosures on virtually every financial transaction, either with the IRS or Treasury.

With the enactment of the Patriot Act and the pending enactment of S. 2498, offshore investors and businesses can likely expect their record keeping and disclosure requirements under the new laws will change.

Given the sizeable penalties that can be levied, it is advisable that legal advisors inform their offshore investors and business clients to implement solid anti-money laundering policies, procedures and controls, as well as become familiar with the tax shelter reporting issues. ​ 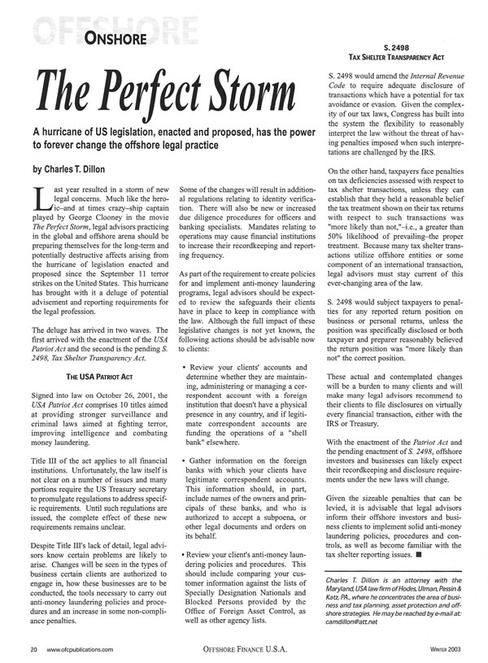