Blocking and rejecting transactions When developing OFAC compliance procedures, businesses should focus on providing sufficient information to staff members in all operation areas to enable them to identify and stop suspicious transactions. However, once a suspicious transaction is identified, making the decision to block or reject can be difficult.

For example, a local exporter uses a bank to finance an overseas shipment, an individual wires a charitable financial contribution to a charitable "sounding" organization or a husband wires funds to his wife in another country, Are these transactions suspicious? Perhaps. A company's main objective should be to ensure suspect items are interdicted. OFAC will then help your business determine the appropriate method of handling the transaction.

Freezing transactions:  OFAC mandates the assets of its targets be blocked or "frozen." This means title to the assets remains with the "listed" national or Country; however, all transfers or transactions with regard to the frozen property are strictly prohibited unless approval is granted by OFAC. Furthermore, all frozen assets must be placed in interest-bearing accounts and held in instruments with maturity dates of less than 90 days.

Examples of such property that fall under the OFAC regulations include, but are not limited to: money, checks, drafts, debts, obligations, notes, letters of credit, warehouse receipts, bills of sale, negotiable instruments, trade acceptance, contracts, goods, wares and goods on ships.

Generally, though, transactions where assets must be blocked are those involving deposits, loans and fund transfers.

Rejecting transactions: OFAC also requires in certain circumstances the rejection of specific transactions, or mandates the outright refusal of doing business with certain individuals and countries. To determine whether a specific transaction should be rejected, OFAC has compiled "rejection criteria" to be used as a reference tool.

Because of the lack of uniformity in dealing with sanctioned countries, it is highly advisable that OFAC rejection criteria are followed. If a transaction is processed that should have been rejected, you may be liable for facilitating a prohibited transaction, just as if you processed a blocked transfer.

Penalties: In most cases, civil penalties are $11,000 per prohibited transaction, but can reach up to $275,000 per violation. Criminal penalties can result in corporate and personal fines of up to $1 million and 12 years in jail.

OFAC does, however, have the capability to mitigate these fines depending on the level of your overall compliance. Thus, an OFAC compliance program offers more than just the ability to identify prohibited transactions, it also offers a mitigating factor should you be subject to OFAC scrutiny.

While the penalties resulting in OFAC violations can be severe, there is no legal requirement that one must handle compliance issues in a particular manner. Instead, the regulations simply require that if someone on the SDN-BE list is involved in a transaction, the transaction must be:

Businesses shouldn't treat OFAC compliance as an afterthought. OFAC screening should be an initial and integral step in any financial or trade transaction, and should occur at each stage of a transaction where the identity of an additional party becomes known.

A successful OFAC compliance program is centered around one concept: due diligence. A company's due diligence in complying with OFAC laws should begin with the board of directors adopting resolutions instituting an OFAC compliance program, as well as the staffing of a "responsible person" for compliance oversight. The responsible person should report directly to the board of directors regarding all OFAC issues.

• Ensuring transactions are being compared with OFAC lists; and
• The company's entire existing customer base is "filtered."

Unfortunately, there are no shortcuts when it comes to being OFAC compliant. A business must always check financial and trade transactions against the SDN-BE list. In fact, OFAC compliance at the minimum should require all operation areas to have a list of target countries and a current SDNBE list.

When monitoring internal compliance with OFAC, it is essential your company's OFAC information be updated regularly. SDNs are frequently updated on an unscheduled basis due to changing foreign policy and national security objectives.

OFAC also dedicates considerable resources to promote compliance outreach, and has published an extensive library of reference materials. These materials are available through OFAC's Web site.

Because sifting through this information can be very time-consuming, it is also important to be aware of OFAC compliant software applications that are available to the public. These applications include stand-alone PC software and integrated mainframe software programs, and should be an essential component of every OFAC compliance program.

So, what does a business do to be a good foot soldier in the war against terrorism? To start, every OFAC compliance program should at least require the development of "corporate compliance memoranda" to be circulated throughout all operation areas. Internal audits can complement this by ensuring the OFAC compliance procedures are being followed. Also, training programs should be encouraged to raise awareness of OFAC regulations.

The US Government's ability to levy economic and trade sanctions is an extremely powerful weapon in today's war against terrorism. Its success, however, depends upon the participation of businesses; in fact, the law demands it. A company's size, geographic location or even the types of transactions it regularly deals with do not shield it from OFAC oversight. 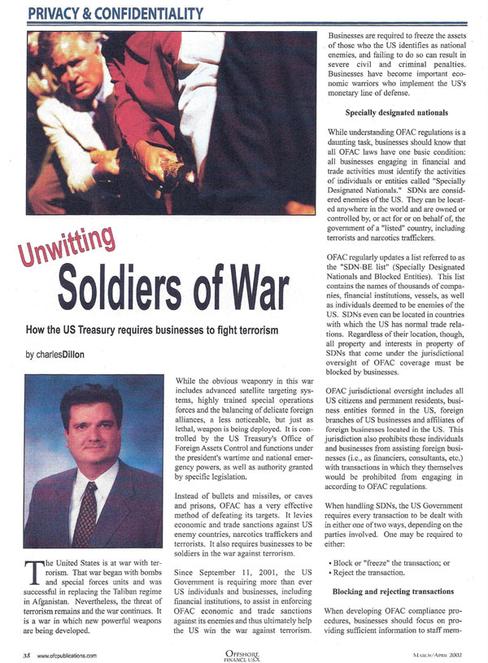 The United States is at war with terrorism. That war began with bombs and special forces units and was successful in replacing the Taliban regime in Afghanistan. Nevertheless, the threat of terrorism remains and the war continues. It is a war in which new powerful weapons are being developed.

While the obvious weaponry in this war includes advanced satellite targeting systems, highly trained special operations forces and the balancing of delicate foreign alliances, a less noticeable, but just as lethal, weapon is being deployed. It is controlled by the US Treasury's Office of Foreign Assets Control and functions under the president's wartime and national emergency powers, as well as authority granted by specific legislation.

Instead of bullets and missiles, or caves and prisons, OFAC has a very effective method of defeating its targets. It levies economic and trade sanctions against US enemy countries, narcotics traffickers and terrorists. It also requires businesses to be soldiers in the war against terrorism.

Since September 11, 2001, the US Government is requiring more than ever US individuals and businesses, including financial institutions, to assist in enforcing OFAC economic and trade sanctions against its enemies and thus ultimately help the US win the war against terrorism. Businesses are required to freeze the assets of those who the US identifies as national enemies, and failing to do so can result in severe civil and criminal penalties. Businesses have become important economic warriors who implement the US's monetary line of defense.

While understanding OFAC regulations is a daunting task, businesses should know that all OFAC laws have one basic condition: all businesses engaging in financial and trade activities must identify the activities of individuals or entities called "Specially Designated Nationals." SDNs are considered enemies of the US. They can be located anywhere in the world and are owned or controlled by, or act for or on behalf of, the government of a "listed" country, including terrorists and narcotics traffickers.

OFAC regularly updates a list referred to as the "SDN-BE list" (Specially Designated Nationals and Blocked Entities). This list contains the names of thousands of companies, financial institutions, vessels, as well as individuals deemed to be enemies of the US. SDNs even can be located in countries with which the US has normal trade relations. Regardless of their location, though, all property and interests in property of SDNs that come under the jurisdictional oversight of OFAC coverage must be blocked by businesses.

OFAC jurisdictional oversight includes all US citizens and permanent residents, business entities formed in the US, foreign branches of US businesses and affiliates of foreign businesses located in the US. This jurisdiction also prohibits these individuals and businesses from assisting foreign businesses (i.e., as financiers, consultants, etc.) with transactions in which they themselves would be prohibited from engaging in according to OFAC regulations.

When handling SDNs, the US Government requires every transaction to be dealt with in either one of two ways, depending on the parties involved. One may be required to either: 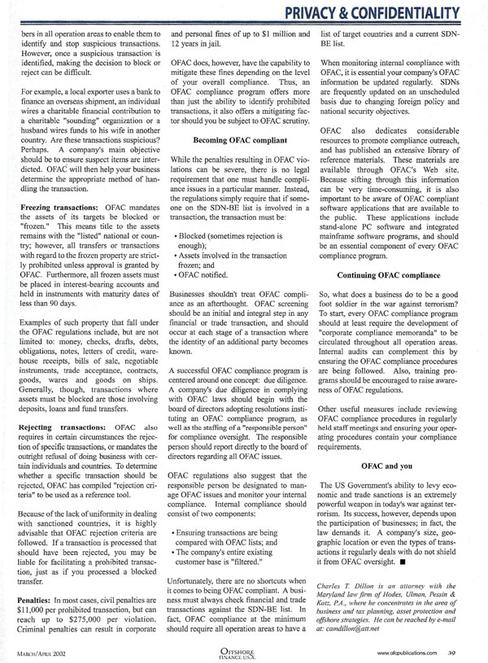 How the US Treasury requires businesses to fight terrorism